Due to UT’s campus closure for severe winter weather conditions, this evening’s work-in-progress showing by The Wooster Group is canceled.  Ticket buyers will receive a refund to their original method of payment.  Please email tickets@texasperformingarts.org with any questions.

Influential and trendsetting, legendary and revolutionary, The Wooster Group is a New York City-based experimental theater company directed by Elizabeth LeCompte since its founding in 1975. Their productions tour nationally and internationally, though have never been presented in Texas until now. In January 2022, the Wooster Group will make their long-overdue Texas debut with a two-week residency on-campus wherein they will present both the acclaimed work THE B-SIDE and a work-in-progress showing called UNTITLED TOAST in collaboration with performer Eric Berryman. Both Productions will take place in the McCullough Theatre which will be transformed into a black box-style theatre with audience seating on the stage.

UNTITLED TOAST is based on Berryman’s desire to find a modern context for the vital, but little known, genre of African-American folklore called toasts: stories, performed in rhyme, that describe feats of legendary street heroes, such as “Signifying Monkey,” “Titanic,” and “Stackolee.” UNTITLED TOAST will incorporate autobiographical material from Berryman with selected toasts from the 1976 record LP Get Your Ass In The Water And Swim Like Me: Narrative Poetry From The Black Oral Tradition, edited by folklorist Bruce Jackson.

This project is supported in part by the National Endowment for the Arts.

The Wooster Group from Texas Performing Arts on YouTube. 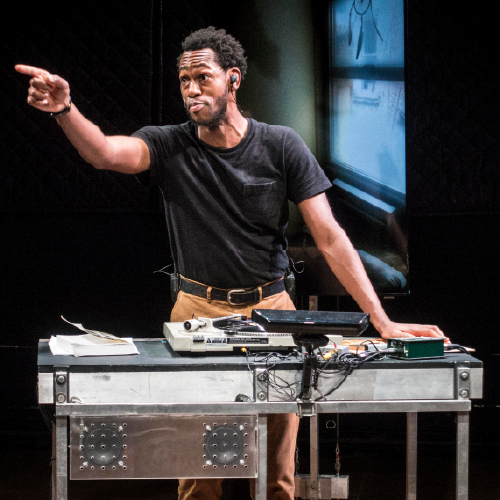 The Wooster Group — THE B-SIDE